Rickman passed away in London with his family by his side. His family said in a statement: “The actor and director Alan Rickman has died from cancer at the age of 69. He was surrounded by family and friends.”.

Actor Alan Sydney Patrick Rickman was born on February 21, 1946, in West London, England. He was the second of four children born to Bernard Rickman, an Irish Catholic factory worker, and Margaret Doreen Rose Rickman, a Welsh Methodist housewife. Rickman later recalled his early years as impoverished but very happy, until his father died of lung cancer when young Alan was just 8 years old.

After showing an early predilection for art, Rickman won a scholarship to Latymer Upper School in London, where he appeared in several school plays, and then studied graphic design at Chelsea College of Art and Design and the Royal College of Art. After graduating, he started a graphic design company, Graphiti, with some friends. He met his lifetime partner Rima Horton in 1965 while in the amateur Group Court Drama Club.

At age 26, Rickman decided to apply to the Royal Academy of Dramatic Art. “There was an inevitability about my being an actor since about the age of 7, but there were other roads that had to be traveled first,” he later said. “A voice in the head saying, ‘It’s time to do it. No excuses.'” Rickman supported himself through his two years at the RADA by taking freelance design jobs and by working as a set dresser. 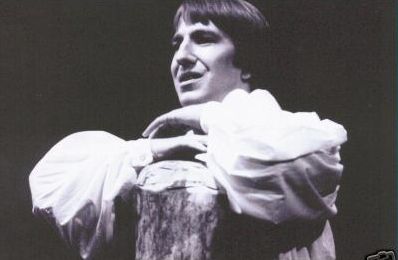 In 1978, Rickman joined the prestigious Royal Shakespeare Company, appearing in The Tempest and Love’s Labour’s Lost, among others, although he disliked the experience: “It’s a factory,” he said. “It has to be. It’s all about product endlessly churned out—not sufficiently about process. They don’t look after the young actors. … People are dropping like flies, doing too many shows at once. There ought to be someone who helps them develop.” Moving on from the RSC, Rickman spent much of the rest of the 1980s acting in BBC serials, radio dramas and repertory theater.

The turning point in Rickman’s career came in 1985 with the starring role of Le Vicomte de Valmont in Les Liaisons Dangereuses, a part that playwright Christopher Hampton (who adapted the script from an 18th century French novel) developed with the actor specifically in mind. “Alan was able to transfix not only the viewer,” Hampton said, “but he also seemed to have a kind of hypnotic effect on the people he was playing his scenes with.”

Rickman performed the unforgettably villainous role first in London and then on Broadway, earning a Tony Award nomination. In 1988, Les Liaisons Dangereuses made the leap to the big screen, as Dangerous Liaisons, with the actor John Malkovich taking over the iconic part of Vicomte de Valmont.

Rickman was soon tapped for his first Hollywood film role, as the impossibly evil terrorist Hans Gruber (ultimately foiled by Bruce Willis’s heroic cop John McClane) in Die Hard (1988). “I got Die Hard,” Rickman later recalled, “because I came cheap. They were paying Willis $7 million so they had to find people they could pay nothing.”

After appearing alongside Tom Selleck in Quigley Down Under (1990), Rickman starred in three successful features in 1991: Close My Eyes;Truly, Madly, Deeply; and Robin Hood: Prince of Thieves, in which he played an unforgettably arch Sheriff of Nottingham. This role, accentuating the first impression made in Die Hard, cemented Rickman’s image as a “villain” actor—a title Rickman disliked: “I don’t see any of [my roles] as one word. It doesn’t matter what I’m playing: it’s not one word, and I think any actor would say the same.”

Rickman’s output slowed following his prolific year in 1991, although he made well-received appearances in Sense and Sensibility (1995) and in the title role of Rasputin: Dark Servant of Destiny (1996), for which he received Golden Globe and Emmy Awards. He also co-wrote and directed his first feature film, The Winter Guest, in 1997, featuring hisSense and Sensibility co-star Emma Thompson and her real-life mother, Phyllida Law. Rickman also made successful comedic turns in 1999’sDogma and Galaxy Quest.

Rickman’s next high-profile role came in the 2000s, when he took on the key part of Professor Severus Snape in the Harry Potter movies. Author J.K. Rowling specifically wanted Rickman for the role, briefing him on unpublished backstory about the character to help him prepare for the role. “I said to Jo Rowling, ‘Look, I can’t play him unless I know him,'” the actor recalled. “She then gave me this elliptical piece of information that I didn’t really understand at first. It was information she hadn’t told anyone else, not even her sister, but it gave me what I needed to take on Snape.” Rickman went on to play the role in all eightHarry Potter films.

Rickman’s other films in the 2000s include Love Actually (2003), Snow Cake (2006), Nobel Son (2007) and Bottle Shock (2008). He twice collaborated with Tim Burton, in Sweeney Todd: The Demon Barber of Fleet Street (2007) and Alice in Wonderland (2010). He also wrote and directed a one-woman play, My Name is Rachel Corrie, winning good reviews in both London and New York City. When asked if he ever tired of his life on center stage, Rickman replied, “No, life has shifting horizons so you might as well keep swimming.”

Following the Harry Potter films, Rickman starred in a number of diverse film roles, including playing Ronald Reagan in Lee Daniels’ The Butler(2013) and Karl Hoffmeister in A Promise (2013). Also that year, he took on the role of Hilly Kristal, the owner of the famous New York City punk rock club in CBGB. From Bowery club owner to royalty, Rickman portrayed King Louis XIV in A Little Chaos (2014).

Alan Rickman secretly married Rima Horton in 2012. “It was great, because no one was there. After the ceremony in New York, we walked across the Brooklyn Bridge and ate lunch,” Rickman told the German magazine Bild.

Rickman was the Honorary President of the International Performers Aid Trust (IPAT). The organization assists artists and performers around the world who are challenged by poverty, helping them to hone their craft for a brighter future. He was also an active patron of the charity Saving Faces.

Rickman died from cancer on January 14, 2016, in London. As one of the most admired British actors of the past three decades, his passing saddened his collaborators and many fans.

“There are no words to express how shocked and devastated I am to hear of Alan Rickman’s death,” tweeted J.K. Rowling. “He was a magnificent actor & a wonderful man.”

As the Powerball approaches a $1.4 billion jackpot, one man is happy he mistakenly purchased a Mega Millions ticket instead. The...

January 12, 2016
Copyright © Neffworking. All Right Reserved.
Back to top
Dear visitor! This is demonstration of Welcome Popup plugin.