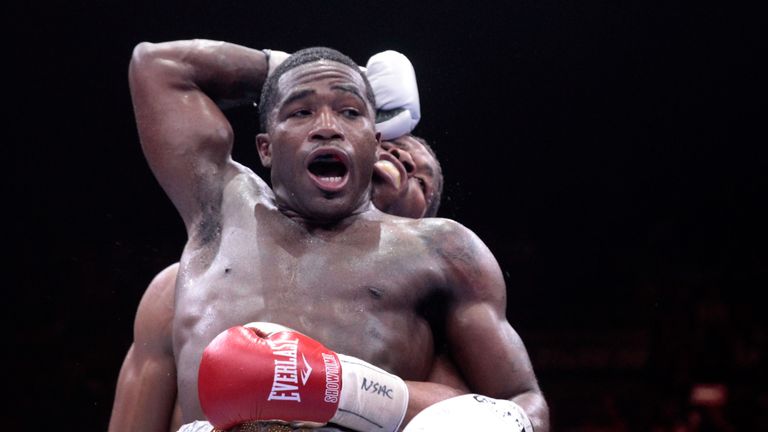 Just a WEEK before his Title Fight, @AdrienBroner faces felony assault and aggravated robbery charges in his hometown of Cincinnati.

NBC News, citing police, reported Thursday that there are two active warrants there for his arrest related to the same incident.

TMZ Sports reported details of an incident in which Broner, 26, allegedly assaulted and robbed a man using a gun outside a Cincinnati bowling alley in the early morning hours of Jan. 21 following high-stakes betting on bowling games.

TMZ Sports said in its report, citing court documents, that Broner knocked the man unconscious and took money from his pocket before leaving the scene.

The revelation came just eight days before Broner is due to defend his 140-pound belt against Floyd Mayweather-promoted opponent Ashley Theophane in the main event of a Premier Boxing Champions card on Spike at the DC Armory in Washington, D.C., where Broner is training.

When asked about the alleged incident, Broner told ESPN.com, “I’m good,” but declined to elaborate.

A PBC spokesman said: “It’s a legal situation that Broner is going to have to work out with his attorney.“

Leonard Ellerbe, CEO of Mayweather Promotions, which is promoting the card, said he was not aware of the details of the situation but added that if there were an issue that Broner would need to deal with an attorney.

It is unclear if the fight will go on as scheduled. A spokesman for Spike said the network was looking into the matter.

Read More on this Story

NYC's own Lovari brings a flavor of R&B/Latin with his newest release "Te Siento". Produced by Full Clip & Engineered...

March 24, 2016
Copyright © Neffworking. All Right Reserved.
Back to top
Dear visitor! This is demonstration of Welcome Popup plugin.